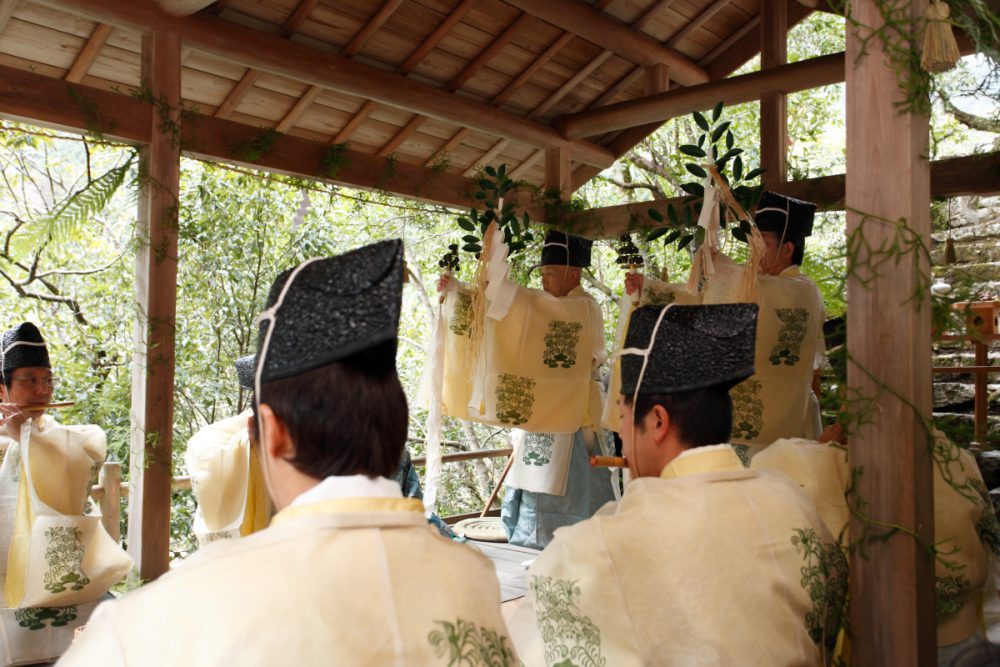 A Journey to Visit the Origin of the Kuzu So Festival

The legendary land was unexpectedly close

As someone who was initially drawn-in by the story of Tadashi Kawase, a painter of scenes from festivals in Nara, I decided to visit the Kuzu district of Yoshino Town for the first time to see “Kuzu So” festival for myself.

If I took a train a little ways from the area of my daily life and drove in a car for a while, I could go deep into the legendary land, the world of old Japanese tales.

My image of the village of Kuzu was an unexplored area that people rarely visited. Even so,  while I took an express train from Kintetsu Kashihara-jingumae Station and I looked out upon the rural landscape as it turned into mountains, I arrived at Yamato-kamiichi Station just as quickly as I thought I would. From the station, I rode in a car along the Yoshino River for about 15 minutes to get to my destination.

From here, the Yoshino River emerges from one of its tributary waterways, the Takami River. From here, it runs through Gojo-shi, Wakayama, and then eventually runs into the sea. The Kuzu district is a river crossroads of sorts and therefore should have been one of the important logistics bases of the Kii Peninsula.

Speaking of which, old houses stand in rows here, possessing the appearance of an area that was once a lively roadside-town of sorts.

I thought Kuzu would have been a place deep in the mountains where no one could visit, but it seems there are many things I cannot know unless I see them for myself after all. 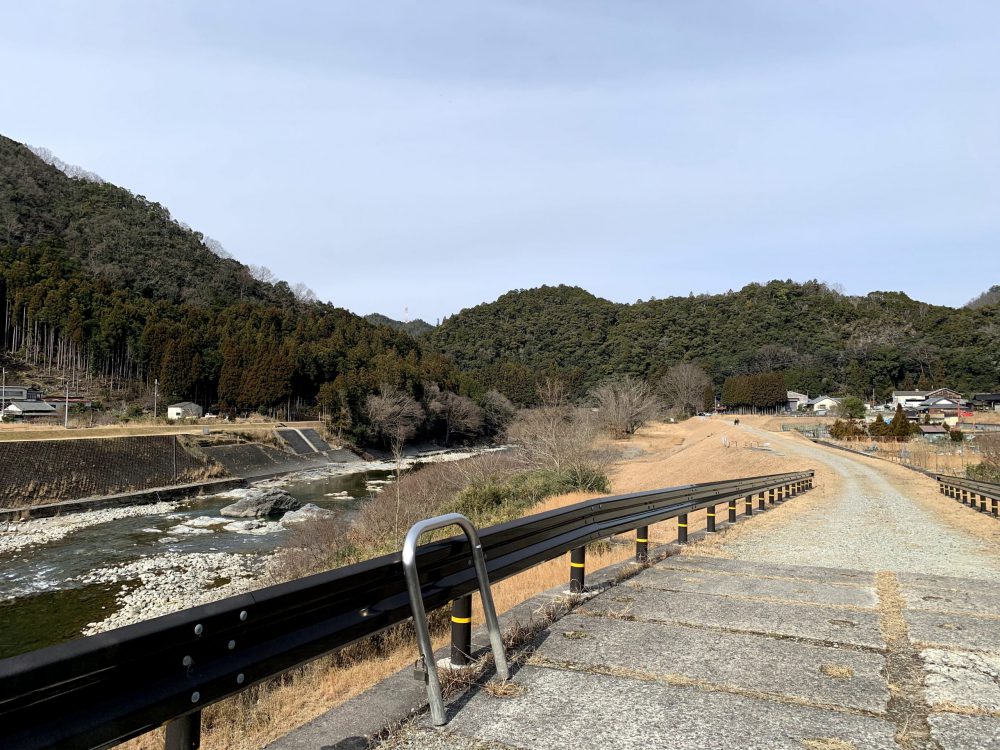 ▲A wide causeway leads to the approach to Kiyomihara Shrine

A quiet space created by the meandering of the Yoshino River

The water of the Yoshino River has a vibrant deep green color and the air around it is clear. As the meandering river approaches the shrine, it creates a quiet and hidden space, giving the impression of being separated from the outside world. It naturally forms a space which seems like a border between that of the sacred world and the profane. 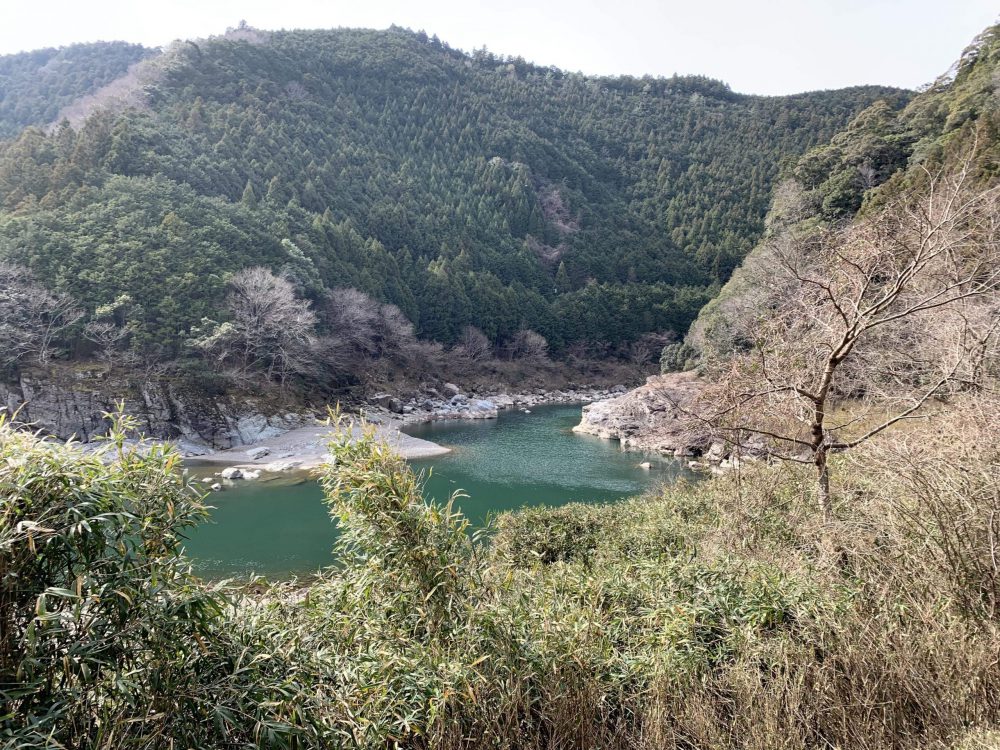 ▲The Yoshino River that meanders and creates a hidden sacred place

When I went further along the river, stone steps appeared near a dead-end in the path. As I climbed the stone steps, a small hall of worship came into view. It seems that this is the stage for the Kuzu So dance.

The structure is built on a narrow section of flat land located on a cliffside upon which only an audience of 40 or 50 people can reasonably stand. After seeing this, I realized that this must be a festival that has been passed down to a very limited number of people.

Behind the hall there are further steep steps that lead to a small alcove in a cliff face where a small shrine house that enshrines Emperor Tenmu can be found. In front of the shrine were placed offerings such as sacred sake and Japanese parsley along with musical instruments. One especially rare offering was in the form of  a living red frog called a “momi.”

Nowadays, momi are very precious and they don’t get offered every year this ritual occurs so I was lucky to see it this time. 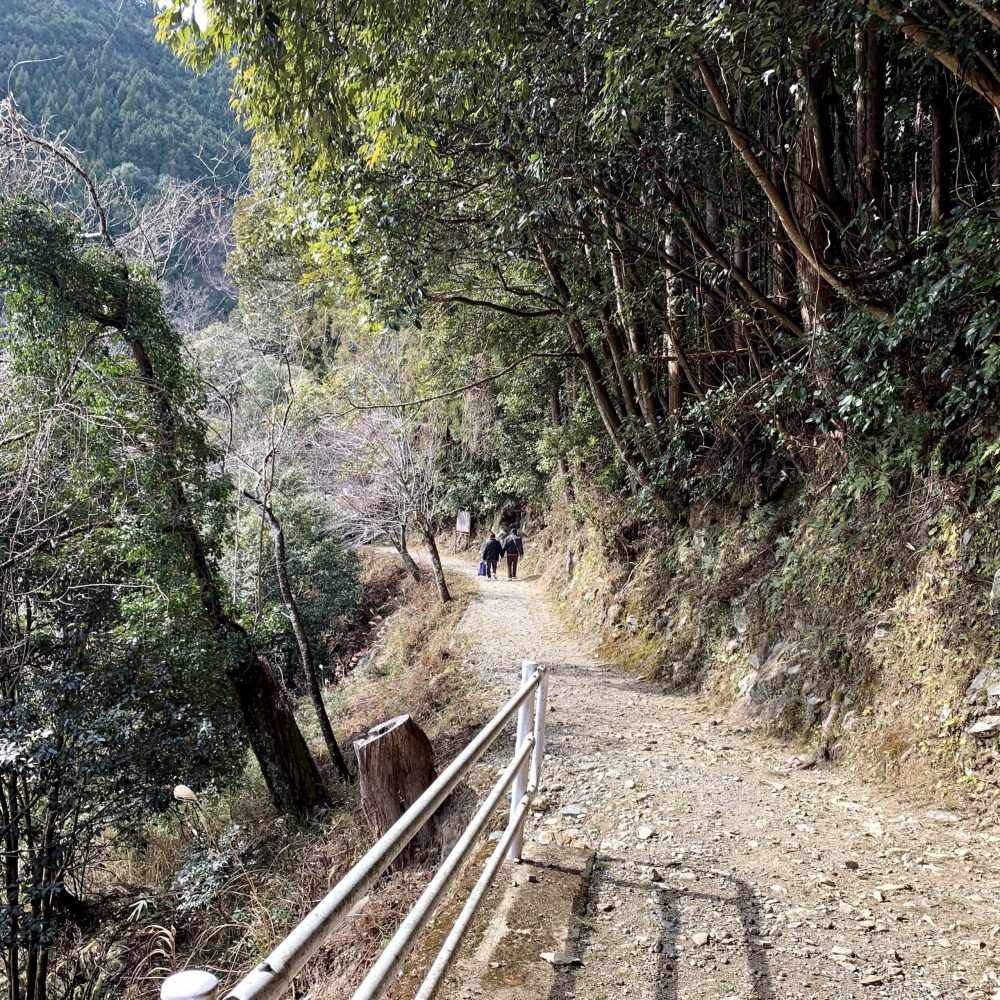 ▲The path to Kiyomihara Shrine 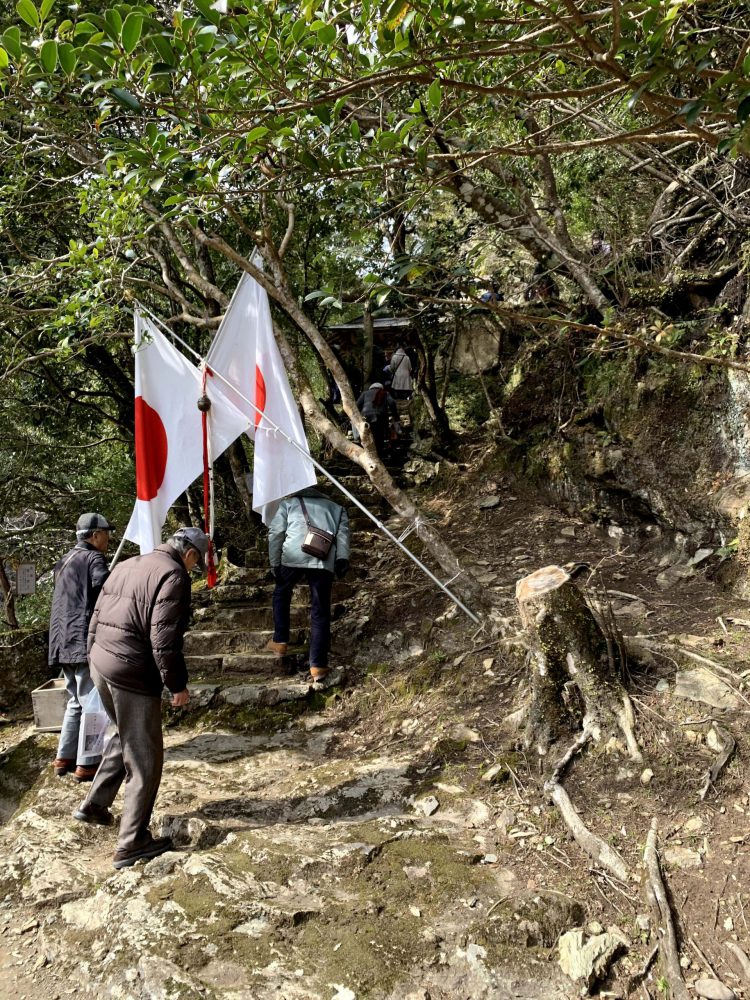 ▲The stone steps seen through the clean air.

A priest came up the stone steps with the sound of a clear whistle. This marks the beginning of the ceremony. He continues up to the hall of worship and purifies the place with a special ritual. After, the elders, wearing traditional hats and white costumes, show up to the stage in a long procession. When all were seated, the ritual began. In the ceremony, there were two dancers while others performed music with flutes, drums, and singing. 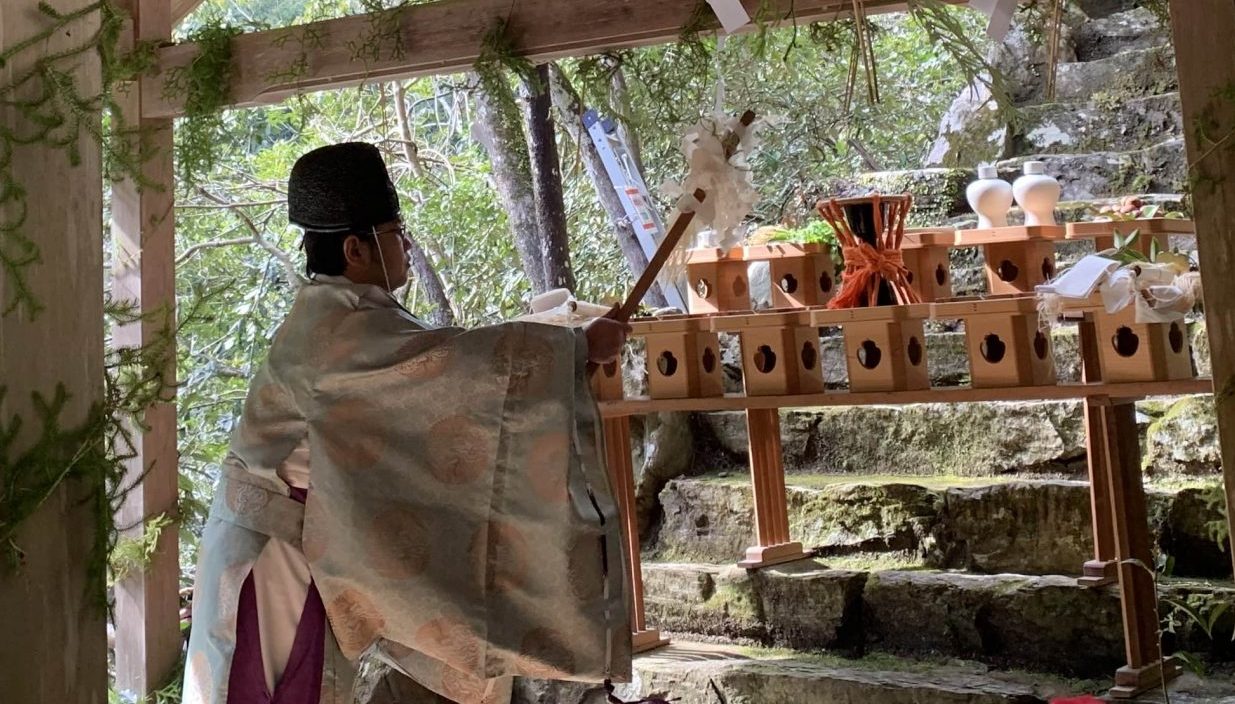 After the priest’s congratulatory words, two songs are sung. After that, a third song is performed with a whistle and two elders who dance with a bell and sakaki (Japanese cleyera) in their hands.

The elders’ voices echo in the river valley.

Tinkle, tinkle, tinkle. They rang the bell three times, held up the sakaki and swung it right to left several more times.

Dances for each of the 12-months were performed in this same manner alongside the high-pitch whistling sound of a flute. 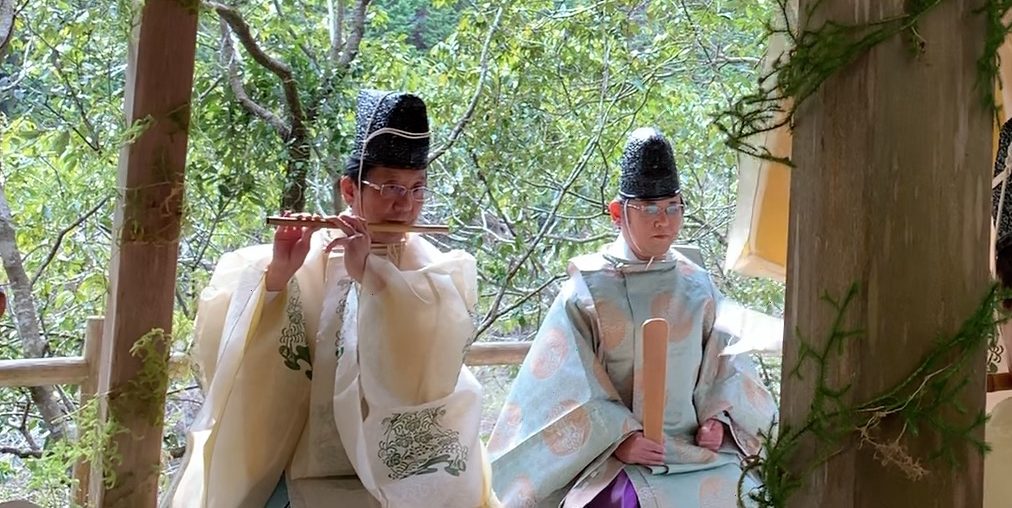 ▲The slow dance that is performed according to a high-pitch whistling sound.

I wondered what the phrase “En-ei” meant, so I looked it up later. It seems that the meaning is basically “prosper in peace for a long time.”

After the dance, the last song was sung.

“In this land where oak trees grow, I made a horizontal handmill with oak. The sake brewed in that handmill is very delicious. Please enjoy it. Marokachi.”

On the utterance of the word “marokachi,” everyone suddenly put their hands on their mouths, and turned away.

Perhaps it means to convey that elders are the important people, like fathers, inspired originally from the old habit of having elder people drink first; or is it something else entirely?

At the end, the names of the parishioners and supporters are read aloud, along with the words “En-ei.” Mysterious words, mysterious dances, and mysterious gestures in a special space… It seemed that I was lost in a mysterious world.

“Kuzu So” is held unchangeably every year on January 14th of the lunar calendar.

The prototype for this ceremony appears in the stories of both the “Kojiki” and “Nihon-shoki.”

In the Kojiki, there is a story that tells of Emperor Ojin visiting Yoshino and about how the people of Kuzu welcomed him through the giving of sake and singing a song that praised his sword. They also gave the recommendation that the sake be brewed using an oak tree handmill. That was 1600 years ago.

Regardless of whether or not this story is true, it was written that this story was already being sung by the merchants of Kuzu during the actual time of the creation of the Kojiki itself in 712 CE. So it seems certain that Kuzu So is the result of a tradition from a very long time ago.

The Nihon-shoki gives us even more detailed clues about the ceremony:

Also, the people of Kuzu are always eating nuts harvested in the mountains. They also ate a very delicious boiled red frog known as a “momi.”

It also states that the land of Kuzu was located to the southeast of the capital, in the region of Yoshino, across the mountains. Since one must traverse a mountain road with steep peaks and deep valleys to reach it, Kuzu saw few visitors. However, people often delivered products to the capital from the Kuzu area. These products were chestnuts, mushrooms and fish. 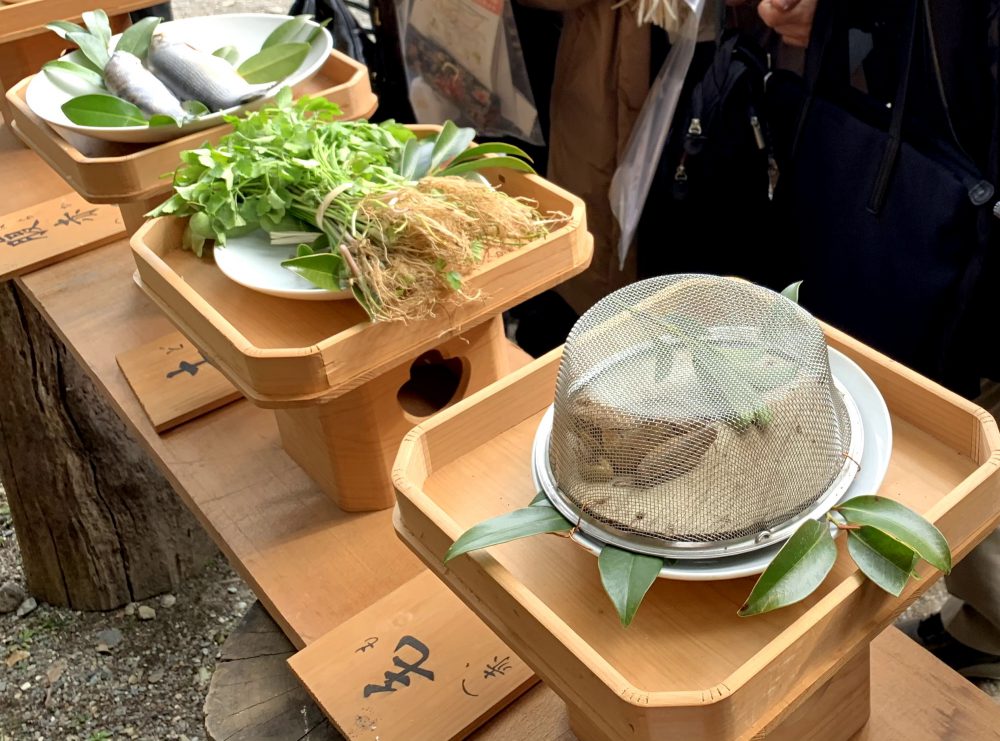 ▲The offerings were point on display on the approach after the ceremony (From the left, fish, Japanese parsley, and the momi)

Reading the information above, it seems that the mountain cuisine was a surprise to the people of the city. I can imagine that it might have been incorporated into the Kuzu So ceremony because the rarity of it was appreciated. Even so, what is that unique laughing gesture all about?

The Kojiki also tells of the Kuzu people’s “oral drums.”  As they did not have any actual drums, they might have slaped their mouths to play what is now called “voice percussion.”  It seems that the inhabitants of the capital palace in Nara laughed elegantly upon hearing this music, which in turn left a strong impression on the local people. So perhaps the laughing style of Kuzu discussed earlier may have arisen from this?

Perhaps the Kuzu So ceremony is rooted in a night of cross-cultural exchange in which the members of the Imperial Court and the mountain folk of Kuzu enjoyed spending time together while drinking and dancing.

Indeed, when I think that Kuzu So is the reproduction of such events, my interest peaks even more for the event.

A festival to preserve memories

The people of Kuzu are first referenced in the Kojiki during the eastern expedition of Emperor Jimmu (the first Emperor of Japan.) In other words, they are an indigenous people who have lived here since ancient times. Despite being one of a number of small mountainous tribes, they seem to have a strong connection to the Imperial Family. Why is this?

I have more questions.

The reason for the strengthening of the connection between the people of Kuzu and the Imperial Family, and therefore the reason for Kuzu So being preserved up until now must date back to the Jinshin War.

This conflict took place over 1,300 years ago. According to the booklet entitled “Kuzu and Kuzu So,” created by the Yoshino Town Kuzu So Conservation Society, Emperor Tenmu, fearing for his life, escaped to Yoshino and was helped by the folk of Kuzu several times. In some history books, it is written that it was also the residents of Kuzu who eventually led the Emperor to victory in the Jinshin War.

It is written that at the time of the Jinshin War, the village which hid and protected the Emperor was Kuzu, right around where the Kiyomihara Shrine is located. The residents of Kuzu served the Emperor local goods and comforted him with a traditional Kuzu dance.

After this, the dance of Kuzu was named the “Elder Dance” by the Emperor. The Emperor then gifted them with instruments and costumes that featured a design based on the phoenix and invited them to the imperial palace to dance; this same dance is still performed at the palace during important ceremonies. 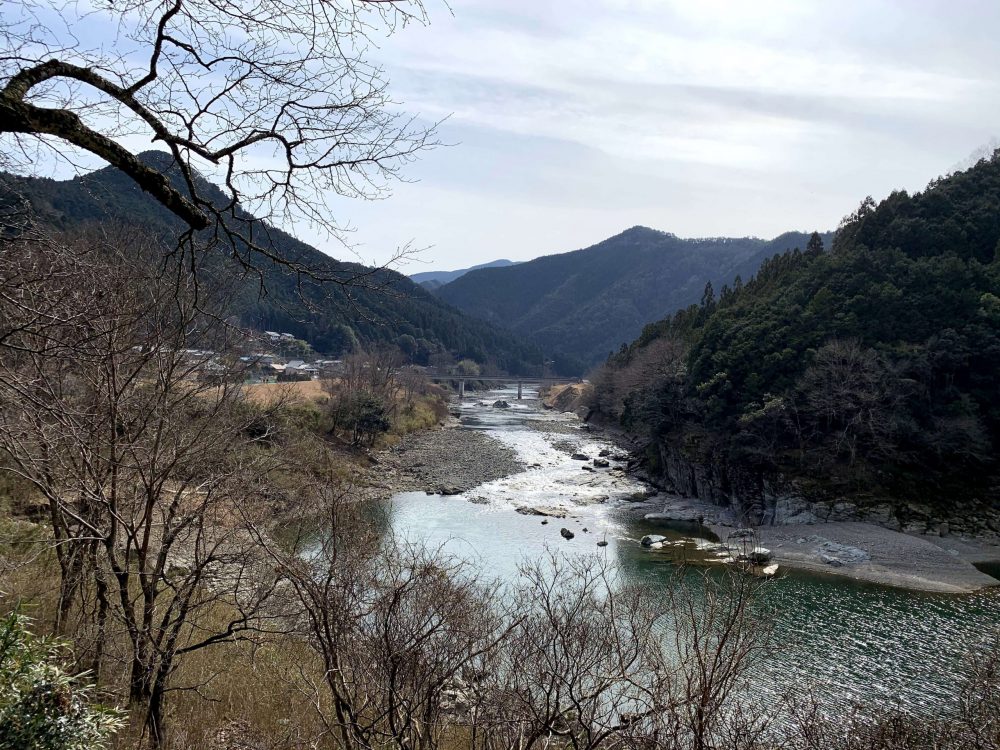 ▲View of Kuzu from the approach to Kiyomihara Shrine

The people of Kuzu, who have appeared in the Kojiki and Nihon-shoki since the beginning of the formation of Japan, and are still associated with the Imperial Palace (even in the present day), are probably a people loved by the Imperial Family.

It may also be the Imperial Family’s strategy to use this storied relationship to convey that indigenous peoples were not just the target of destruction, but also helped in the founding of Japan and were a people with whom drink and dance were shared. 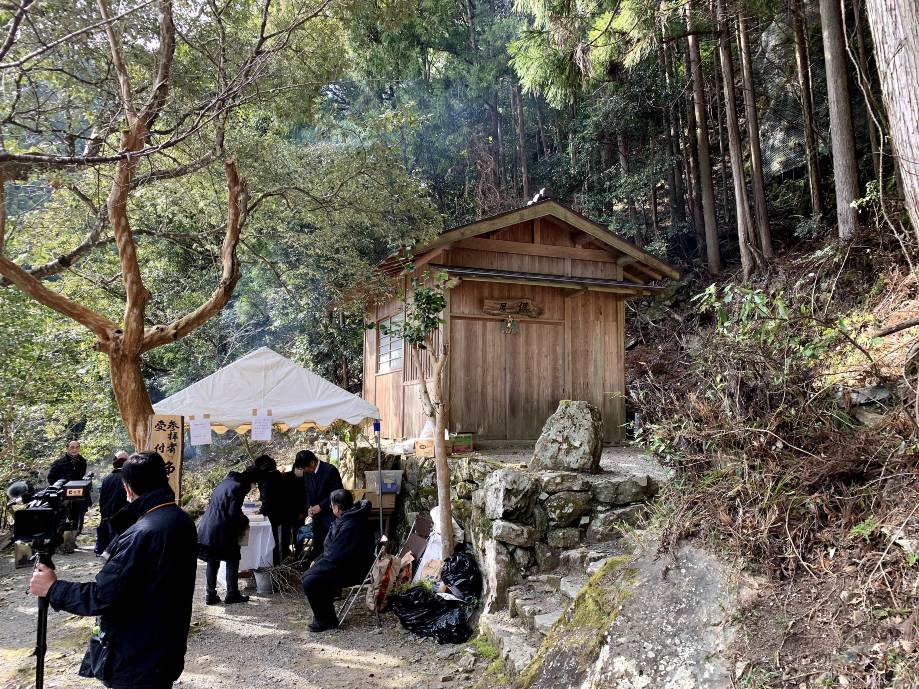 The achievements of the Kuzu people are praised even in Noh theater.

In the Noh performance of  “Kuzu,” a story is told of an old man of Kuzu who gave Emperor Tenmu Japanese parsley, sweetfish and hid him in a boat when his pursuers approached.

If I think about it, it is no exaggeration to say that Emperor Tenmu was the one who ordered the creation of the Kojiki, the creation of the laws and an ordinance system that would provide the prototype for the Japanese state, and large-scale cities.

The people of Kuzu are proud that they are the ones who saved Emperor Tenmu and therefore created the foundation for Japan as it exists today.

“Because there is an old man of Kuzu in this place in Yoshino, you can receive offerings.”

This is the second song (among the four songs of Kuzu So) and it is dedicated to Emperor Ojin. The feeling of pride for Kuzu is apparent in this line.

The festival of Kuzu So has been passed down to the current era in order to retain memories that should not be forgotten. I felt that I saw the origin of the festival in the people who still preserve and protect it today. 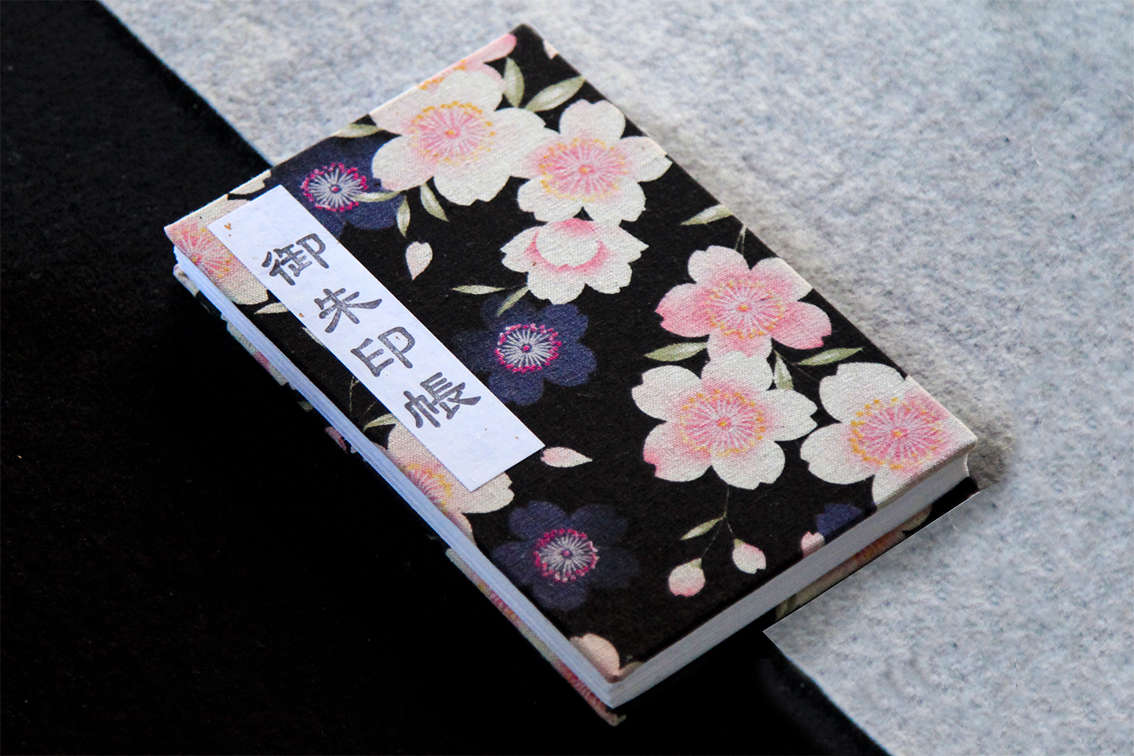 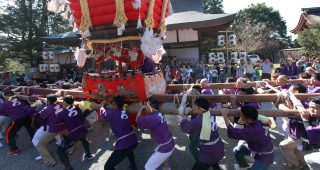 Aki Matsuri: Participating in one … 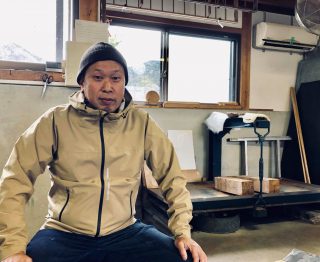