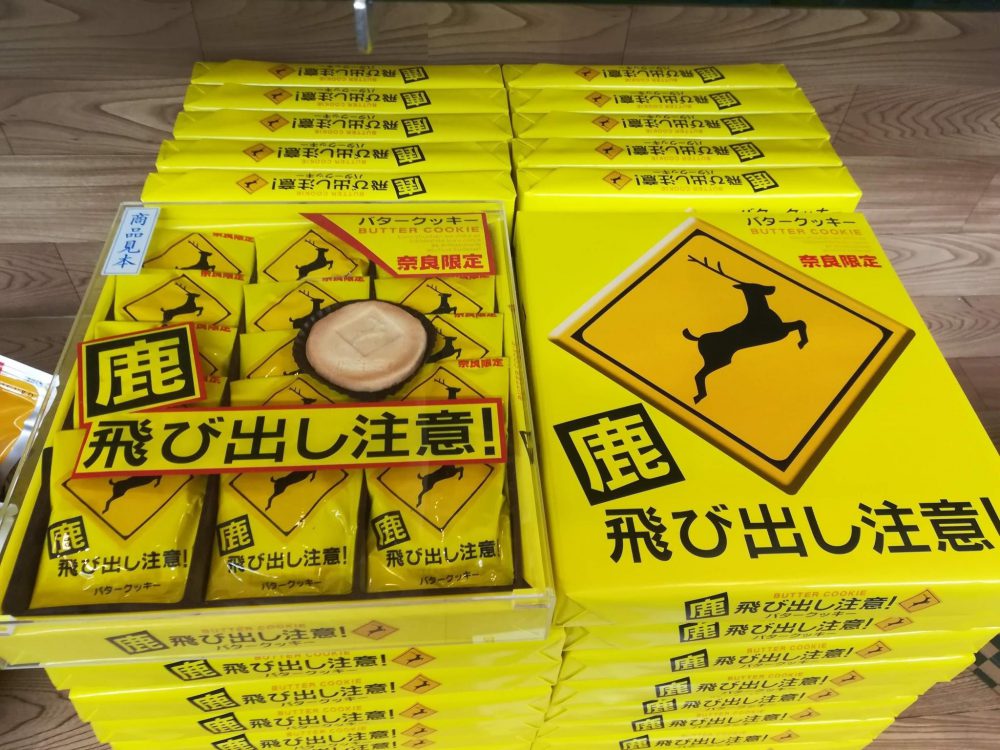 Japan’s “michi-no-eki” Roadside Markets: Where the Countryside Opens to the World （Part 1）

Japan is a country internationally well known for its massive metropolitan areas, bursting with activity and featuring tens of thousands of shops and restaurants to discover for the avid urban explorer. Equally interesting but still remaining relatively undiscovered are the plethora of roadside stores (usually found in the countryside) which specialize in selling local goods, known simply as “michi-no-eki” or “road stations.” These michi-no-eki serve as centers for the promotion and sales of locally produced goods to visitors and locals alike. Local products found at michi-no-eki often have a surprising amount of variety, from handmade crafts and specialized products to organically grown crops that change with the seasons.

As the name suggests michi-no-eki are designed to be easily accessible by vehicle, and are therefore often not even seen by most international visitors who mostly stick to trains and buses for local transport (unless you rent a car). I find this to be darn shame as the amount of interesting, high quality products that can be found in these local markets often dwarf what you can find in usual grocery stores. Prices of locally grown crops sold in these spots are often much cheaper, of higher quality, and bigger than stuff you can find in super markets. Furthermore, michi-no-eki are one of the few places you can reliably find natural/organically grown goods that are not packaged in 50 million layers of plastic, which seems to be the unfortunate norm in this country ( individually wrapped cobs of corn sold in dollar stores).

Luckily, many of these places can actually be reached on foot or by bicycle from a local train line, or for the more remote areas, it is always possible to just take a bus. For that matter, anybody who has ever travelled by bus through Japan has probably been to a michi-no-eki, as there are many of them located along the major highways that buses use as places for breaks, though the amount of time you usually have to explore them on your own is limited, and unless you can read Japanese, you often don’t know what you are looking at.

So, I decided to tag along on a Yoshino Visitors Bureau bus tour of some of the more difficult to reach michi-no-eki markets in the Yoshino region of Nara Prefecture and write about what can be found at each one. In Part 1, I will introduce three different michi-no-eki.

Kamikitayama Village’s michi-no-eki was undoubtedly the most remote area we had the chance to visit on the tour. Located in the southeastern mountains of Nara (about an hour away from Yoshino by bus), the village is estimated to have a population of less than 500 people, which continues to decrease as the years roll on. The route to the village follows a somewhat narrow road through dramatic, heavily forested canyons overlooking winding rivers far below. We even saw some wild monkeys hanging out along the side of the road at one point, underlying the remoteness of the area. The michi-no-eki itself is rather small, but also was the most beautiful spot along the route, constructed right on the edge of a river in a forested canyon. Beside being a market for local goods, Kamikiyayama’s michi-no-eki also doubles as a Yamazaki convenience store, supplying snacks and drinks to locals and travelers alike, making a suitable stop to. 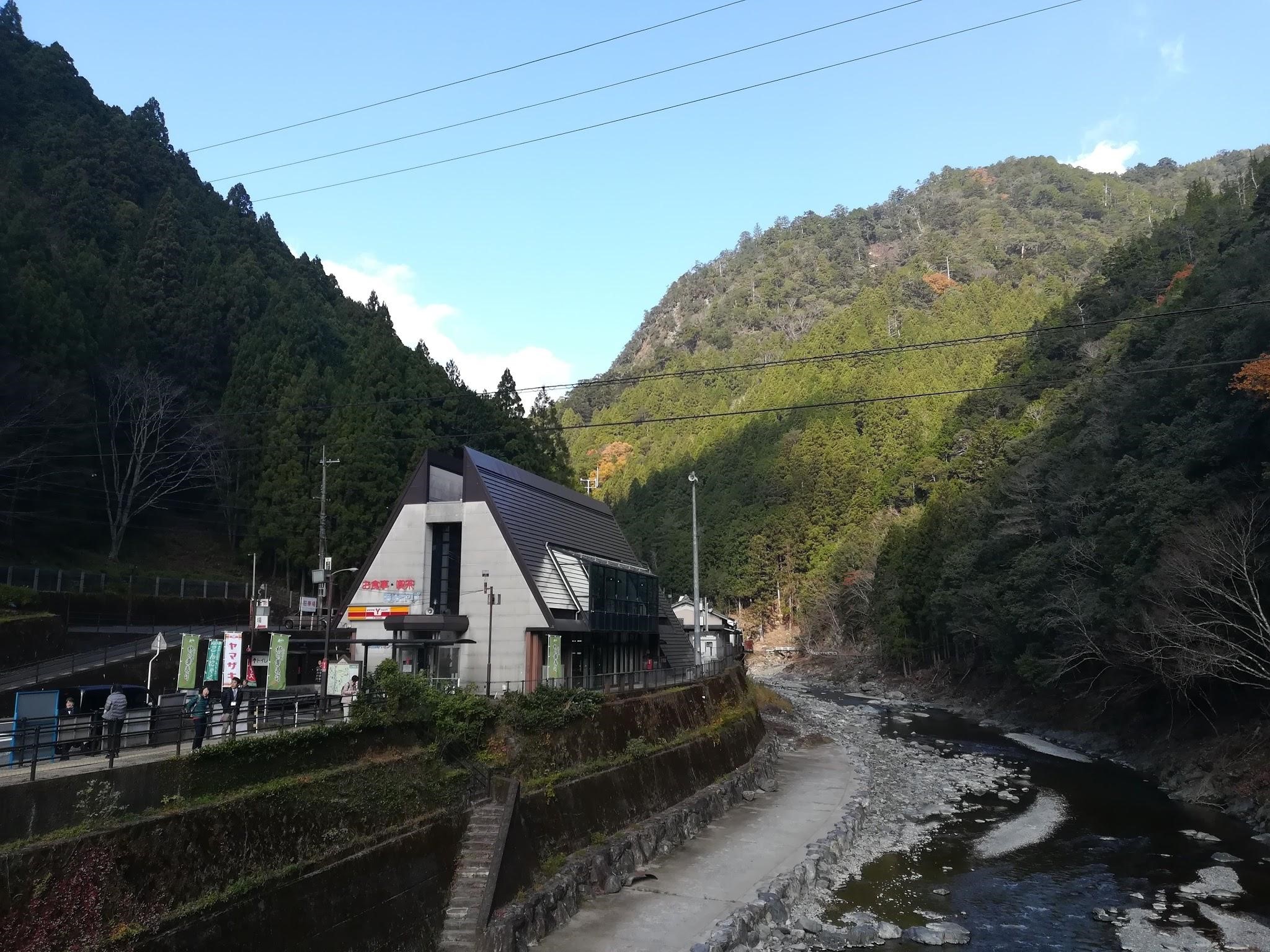 Kamikitayama local specialties worth checking out

Deer-crossing road sign butter cookies
While seemingly a product of Nara Prefecture, rather than just Kamikitayama Village alone, I decided to include these cookies on the list because I think they are pretty funny. This product plays on the fact that the whole region of Nara (and basically most of Japan) is overrun with too many deer, and so they can pose quite a hazard to drivers as the wander around the countryside looking for food. So why not make a cookie making light of the problem and profit from it, I suppose? It is definitely memorable and makes for a nice novelty item. I did not see this product at any other michi-no-eki on the tour so, as far as I know, Kamikitayama Village is the only place you can get these things. 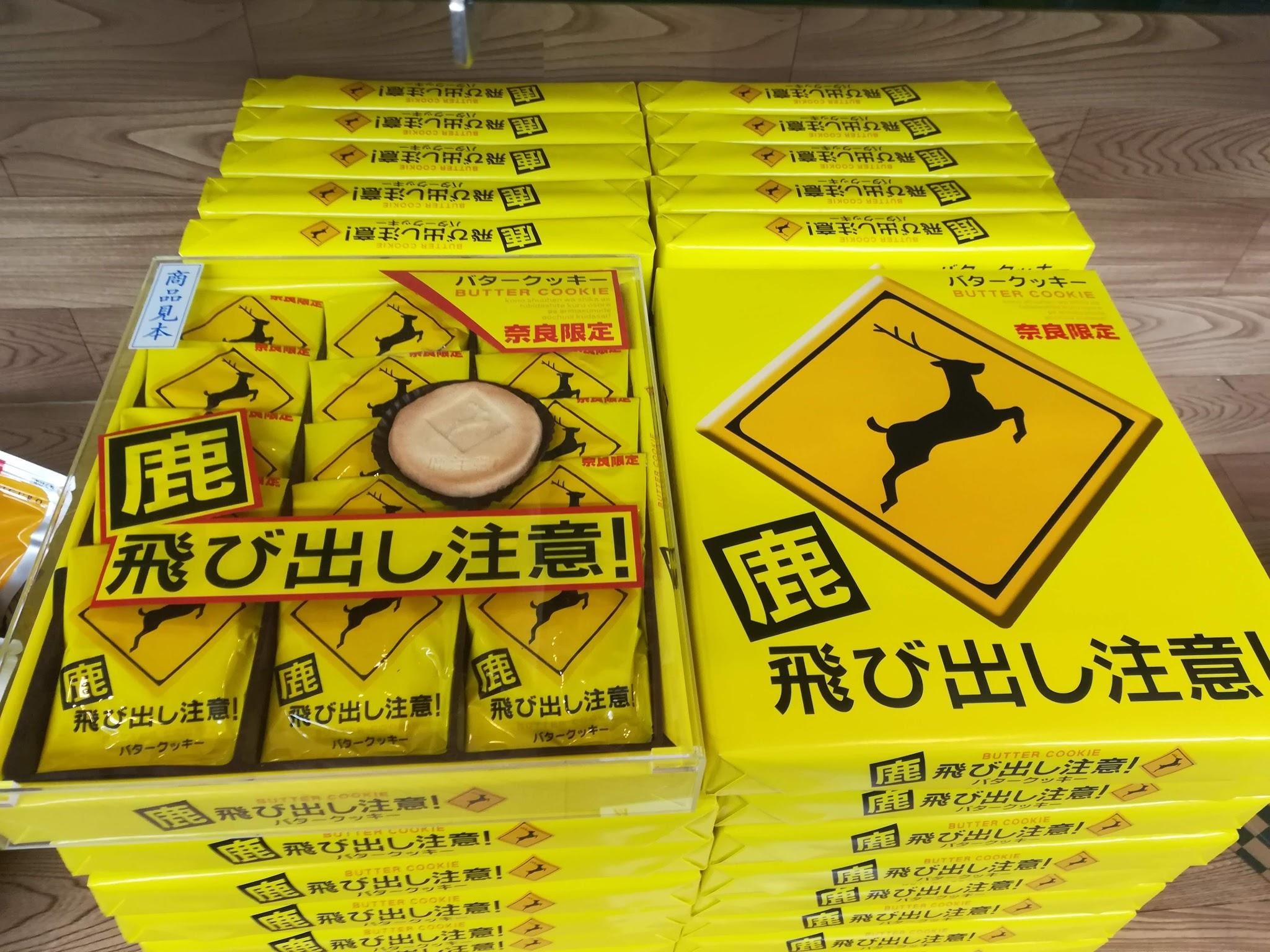 “Tobidashi chui!” or “watch out for [deer] dashing out!”

Kamikitayma konyaku
Konyaku is a type of popular gelatin food made from the starch of a konyaku plant, which is like a type of yam. After the gelatin is produced it is often flavored in a special way, with Kamikitayama having its own special style that was immersed in soy sauce. 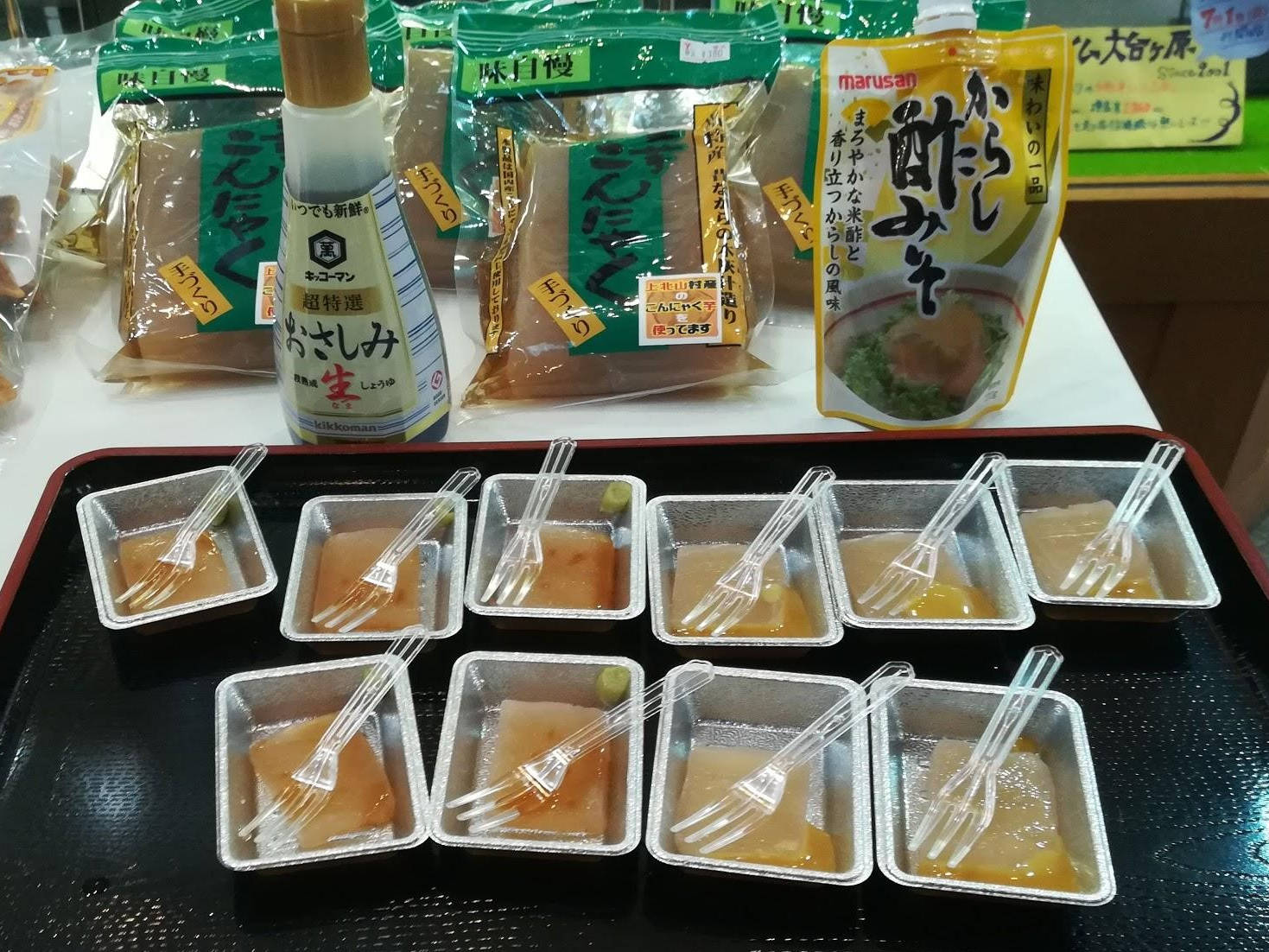 Other
Other goods that I found interesting included very beautifully varnished, handmade wooden crafts (such as small boxes, chopsticks and so on) and the pickled “umeboshi” plums. Umeboshi come in a variety of different flavors and sizes, but my favorites are the especially salty and sour kind, which is apparently the style of Kamikitayama.

Located next to the michi-no-eki is a beautiful river which would be absolutely lovely to hang out around in the warmer months of the year. There is also a local onsen on the other side of the river that opens from 2pm. Kamikitayama is a town known for its outdoor appeal, so anybody interested in hanging out in nature would certainly get some joy out of checking out this interesting village. 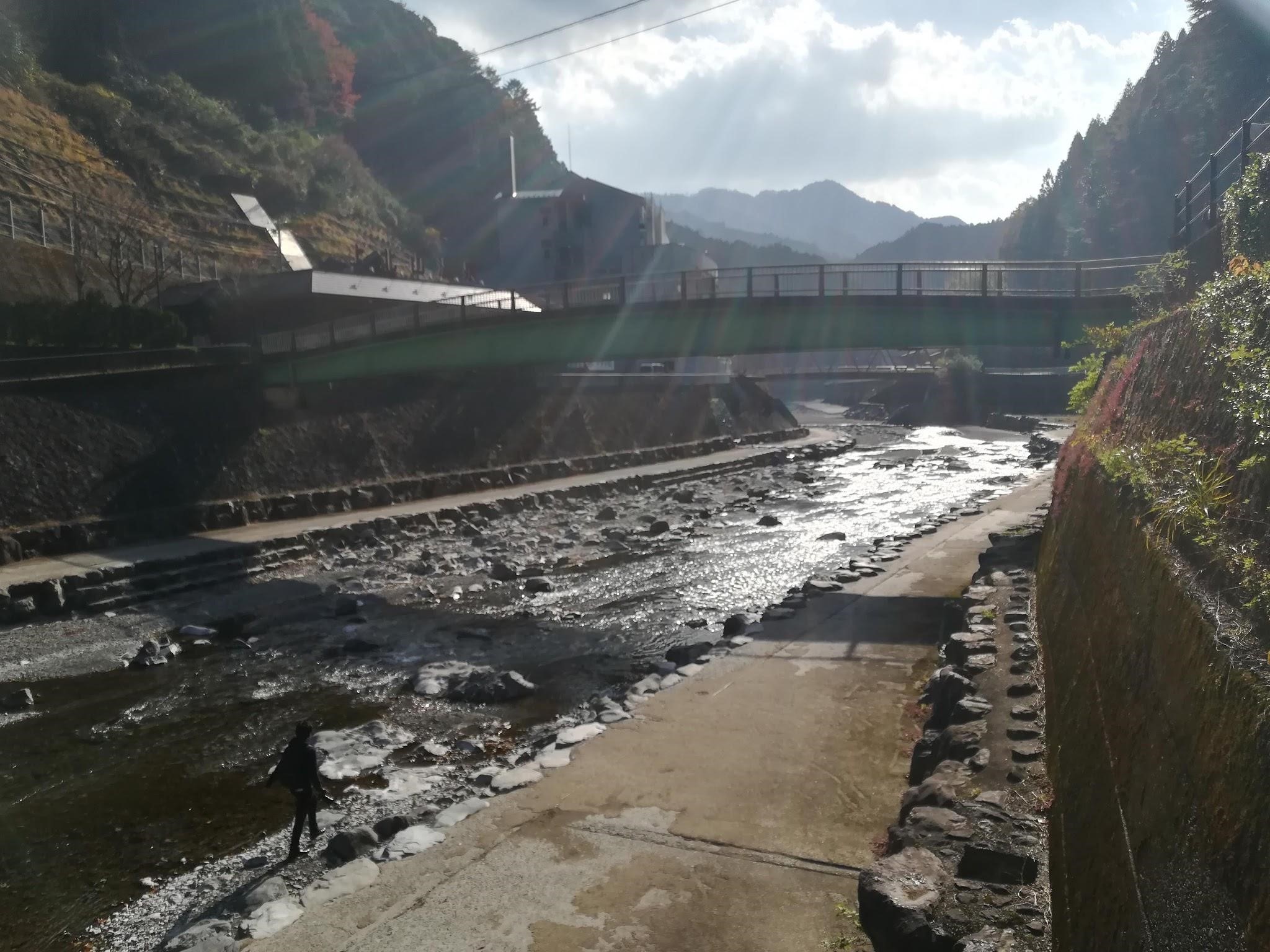 The second stop on the tour was the village of Kawakami, also located in the southern mountains of Nara Prefecture. Much of the community of this village was relocated to higher ground in relatively recent times to accommodate a new dam and the resulting reservoir it created. The michi-no-eki (the building with a red roof in the picture above) is located in a new district, overlooking this reservoir and is also sandwiched between a new hotel and the village central government building. This market features a small restaurant where you can purchase some delicious food, including special curry and ice cream. 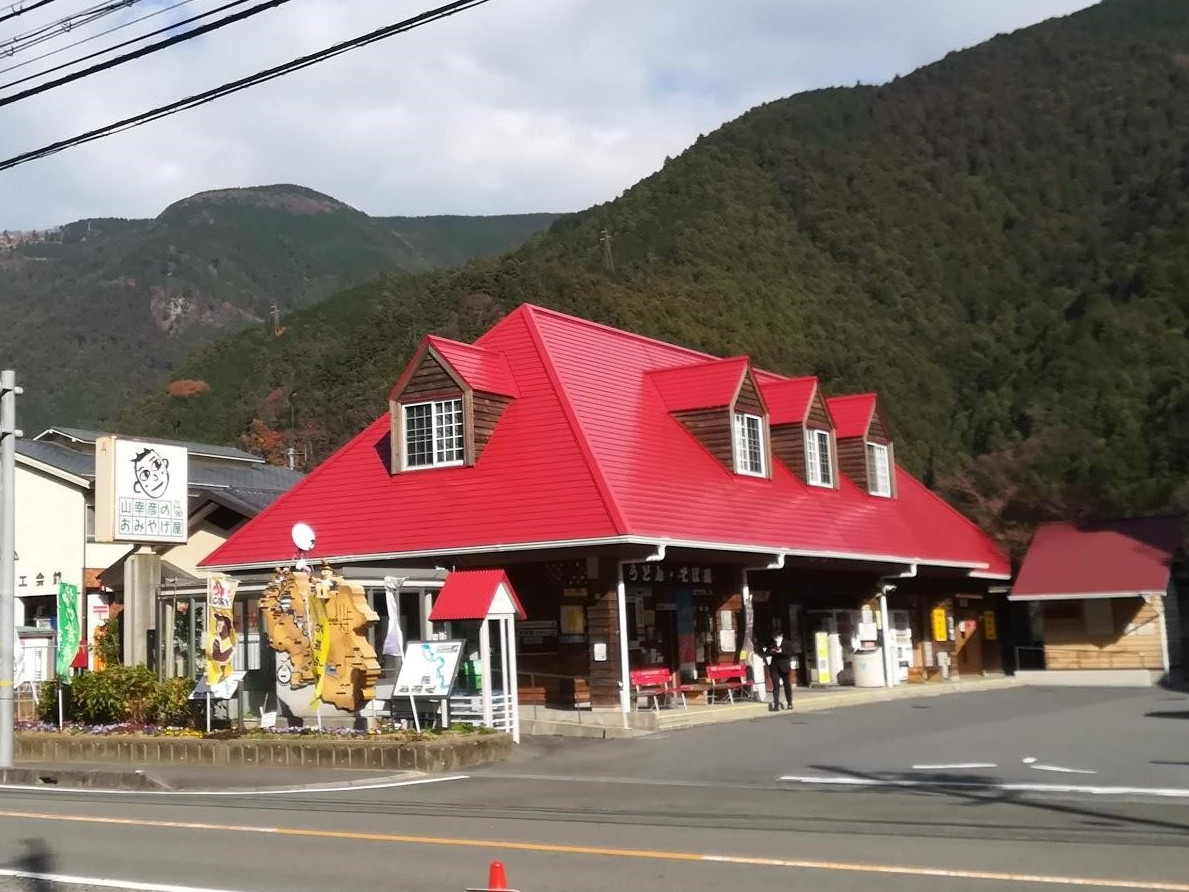 Kawakami Local Specialties worth checking out

Yuzu-yokan jellied desserts
Yokan is a Japanese dessert made from beans that usually comes in the form of rectangular shaped blocks and eaten with a small, flat wooden utensil. This local form of the dessert is made from Yuzu citrus which is grown in the town and is one of the most popular goods sold here.

Hiyuchi-mochi rice cakes
Locally made rice cakes that have a natural green coloring and are filled with sweet red bean paste. These cakes are green due to the fact that the rice cake dough is infused with naturally grown yomogi (mugwort), which has slightly spicy taste to it.

Other
Other interesting products on sale included hygiene products, handmade wooden crafts, and spicy seasoning made with a mix of pepper and garlic.

As mentioned before, there is a really nice hotel located just across from the michi-no-eki that features a beautiful onsen hot spring facility with an amazing view overlooking the reservoir below and surrounding mountain scenery. There is also a post office (with an international atm) in the area that can be very convenient if you need it. There is no convenience store near the station but there are drink vending machines and the previously mentioned restaurant.

Uda is a slightly larger historical town (called a “city” due to having a larger population but it is actually a pretty rural area) based in the eastern mountains of Nara. Once the domain of the relatives of the famed Sengoku warlord, Oda Nobunaga, this town features the remains of a mountain fort, a traditional streetscape lined with old shops, and a huge michi-no-eki (Ouda michi-no-eki) that sells the area’s impressive amount of locally produced goods. One of the more impressive markets in the entire prefecture, this location features a restaurant, farmer’s market stocked with locally grown produce, and free-to-use onsen foot bath. 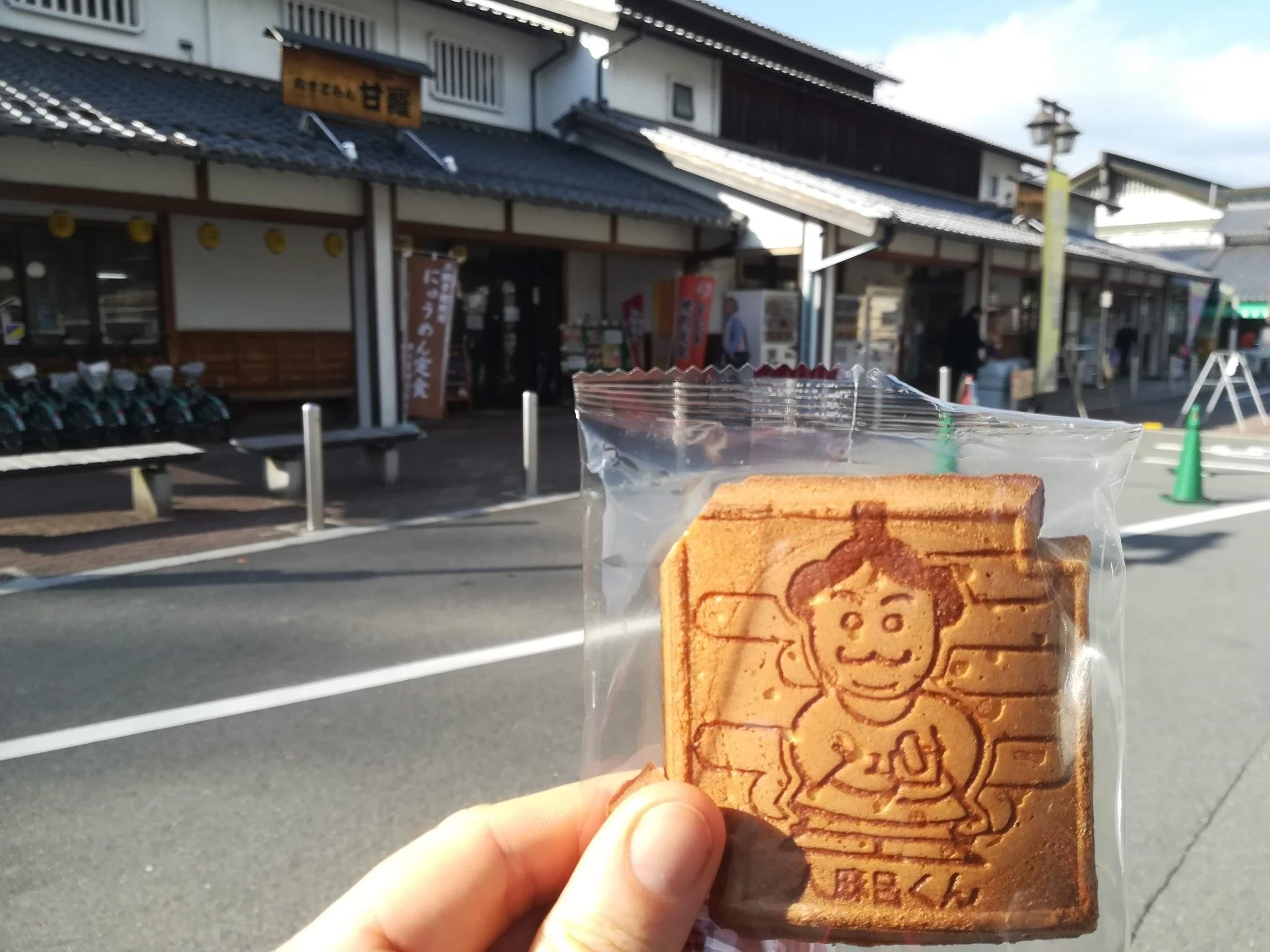 Ouda Local Specialties worth checking out

Hitomaru Senbei Rice Cookies
These cute cookies are the most famous souvenir of Uda, featuring a design based on the image of the famous poet of the Asuka period, Kakinomoto no Hitomaru, who once composed poetry about the Uda area. A package of these makes for a good gift for the family, office or maybe just a nice day of hanging out alone on the sofa and stuffing your face with cookies.

Niku udon noodle soup
A famous menu item of Ouda michi-no-eki’s restaurant, this udon soup features, thick and chewy udon noodles, tender strips of pork, and green onion slices, all based in a hearty broth. I ended up having this for lunch during the tour and was blown away by its excellent taste (especially on a cold winter day). It was so good that after finishing the contents of the soup, I actually drank the broth all the way to the last drop, which I almost never do. I definitely recommend this one if you are looking for some lunch on your journey. The price was fairly reasonable as well, coming in at 800 yen. 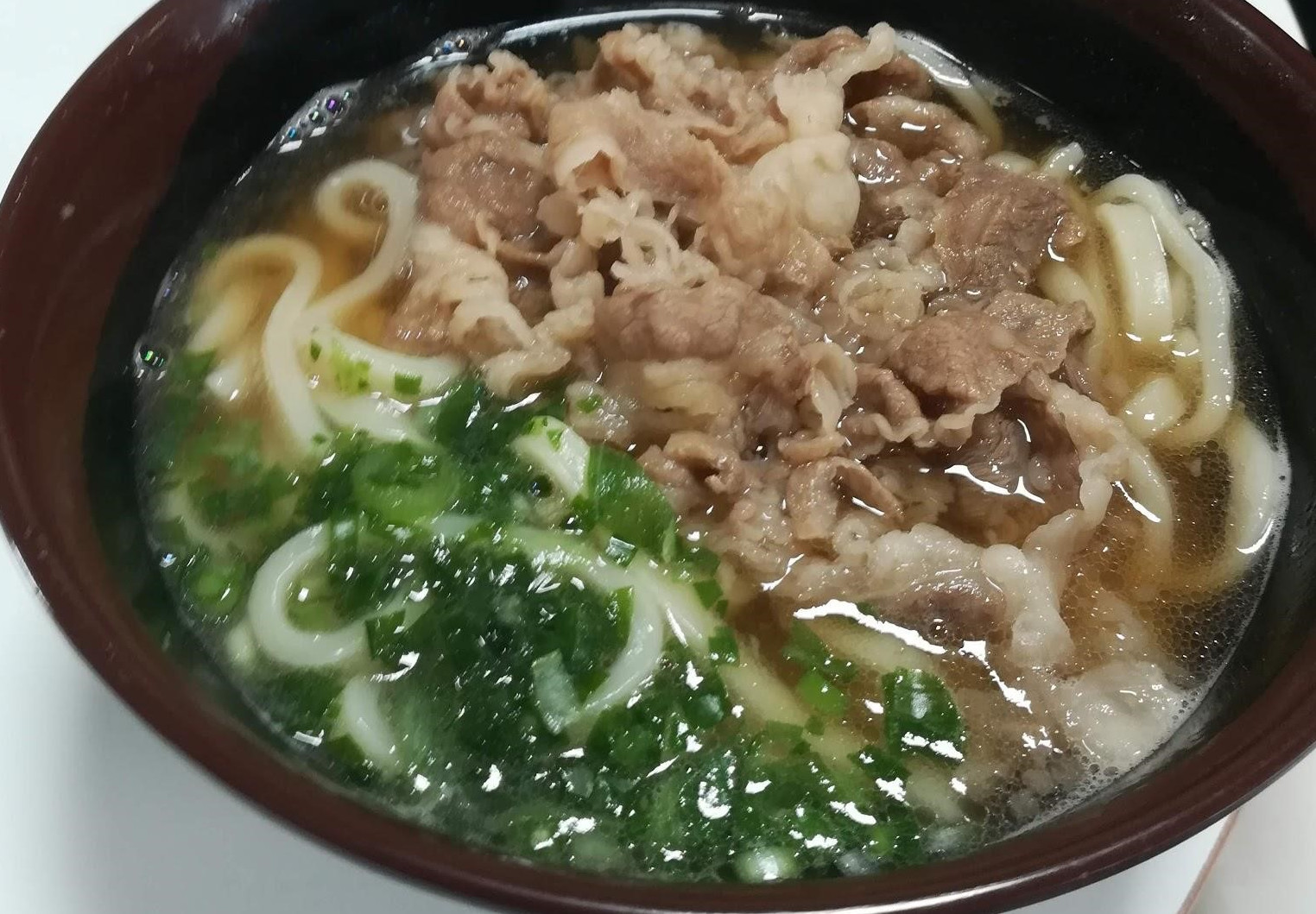 other
Locally made pottery, clothing, pickled foods, and a plethora of other goods can also be found around the michi-no-eki for those who have the time to look. The farmers market, which is located in a separate building, often has a variety of different fruits and vegetables on sale which change with the seasons. It being the late fall when we arrived, there was a bunch of persimmon and citrus fruits on display. 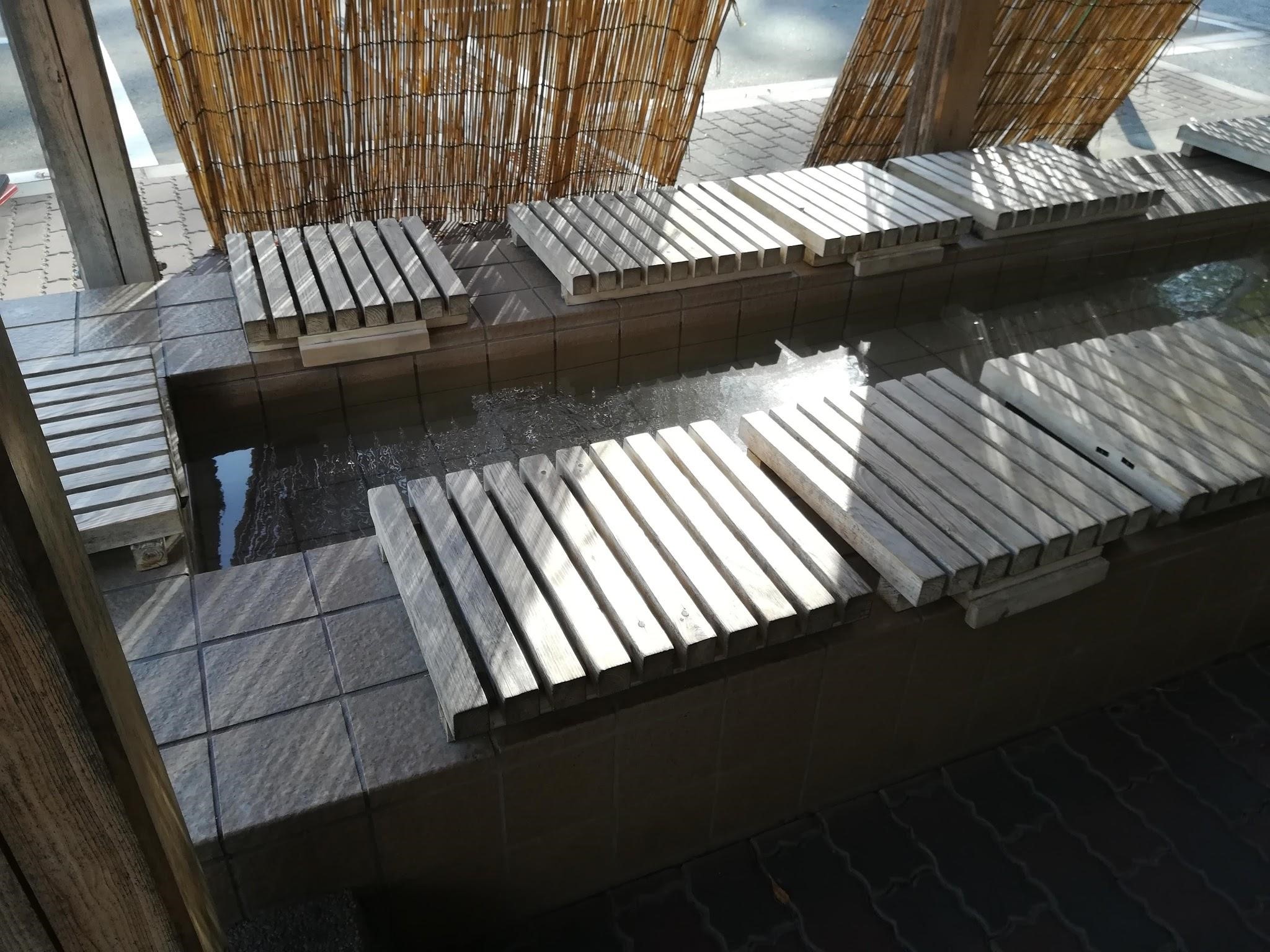 There is Lawson convenience store located next door to the michi-no-eki if you need access to an ATM. You can apparently rent bicycles from this michi-no-eki and go for a little tour of the town on your own, which would make for a nice way to spend the afternoon. The area of Uda has a lot of other interesting stuff to see, with a much larger population than most other mountain towns in Nara Prefecture.

Japan’s “michi-no-eki” Roadside Markets: Where the Countryside Opens to the World （Part 2） 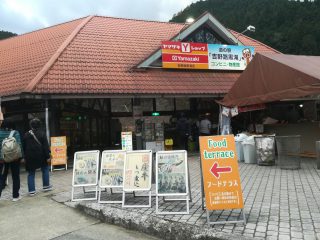