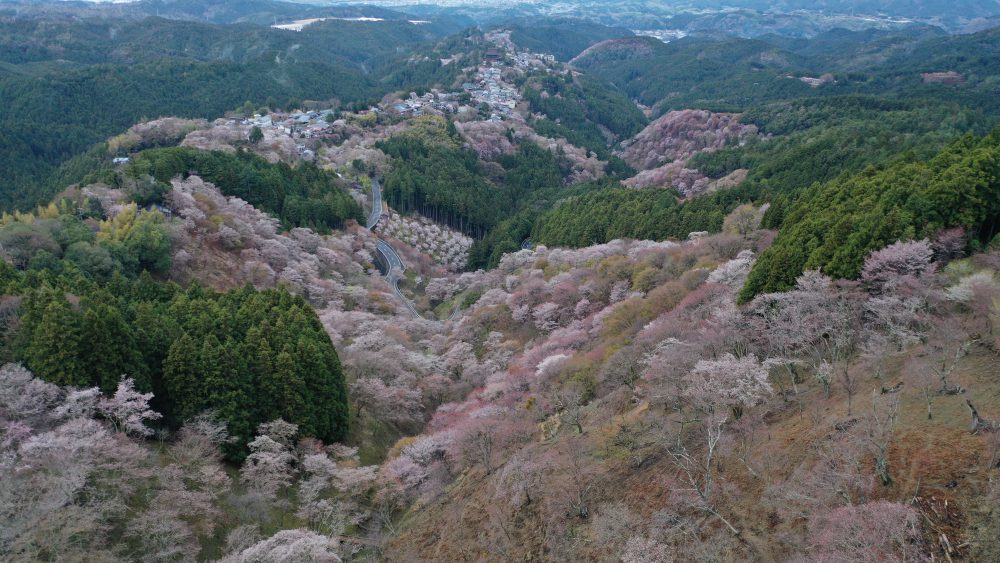 So you have decided to come to Yoshinoyama to see Japan’s most famous cherry blossoms. Congratulations! Because you are in for one-of-a-kind experience. However, there are some things that you should know before you arrive. Take it from someone who has survived three seasons of assisting visitors during Yoshinoyama’s cherry blossoming, understanding the following information can make or break your experience here:

Yoshinoyama is a town district built along a ridgeline that is also the most famous location in Japan for viewing cherry blossoms (known as “Sakura” in Japanese). It can be accessed by train (Yoshino Station), or motor vehicle. Despite its name, there is no mountain known as “Mt. Yoshino,” as it is often translated; “Yoshinoyama” is simply the name of the area. Visitors should plan on walking several hours (uphill and downhill) if they want to see the entire area.
Besides cherry trees, Yoshinoyama is a deeply significant area historically, with many old temples and shrines. A wide variety of shops and restaurants can also be found in the area which sell traditional foods (such as kudzu and persimmon-leaf sushi) to modern goods as well. There are also plenty of places to stay the night, but these are limited to mostly being traditional Japanese ryokan with Japanese style futon beds. Though many ryokans have beautiful bathing facilities which offer stunning views overlooking mountain scenery, there are no natural hot springs in the area.

When is the best time to see the cherry tree blossoms?

Getting down to it, this is not an easy question to answer as it entirely depends on the weather of the season. Also, what would be considered “best” may be a bit subjective. Yoshinoyama has about 30 thousands cherry trees at different elevations that bloom at different times. Arrive too early and you may only see the bottom trees in bloom, arrive too late and you may only see the highest grove in bloom.

Generally, the best bet is to arrive around April 5-10 for the max amount of trees in bloom at different elevations, but it can change radically depending on the weather for the year. I have only been here for 3 blossomings but from my limited experience I can say that erring on the side of a little late is better than too early. Being a little late means you can usually still see a lot of blossoms around at all elevations, as well as beautiful showers of cherry blossom petals carpeting everything.

To better illustrate my point about variability from year to year, 2017 experienced a “normal” spring, which meant the blooming was around its peak around 5-8 of April. The following year it was very warm and the peak time was around the end of March/start of April. Finally, in 2019, despite being a very warm February and March, the weather ended up cooling down again and a slightly late bloom occurred with the peak being around April 8-11. Outside of the effects of temperature, strong wind and rain can also quickly strip cherry trees of their blossoms.

As you can imagine, making travel plans to see the blossoming of the cherry trees can be a very frustrating thing but leaving some room for adjustment of your plans can address that. And although it is highly recommended to stay on Yoshinoyama at one of its many great overnight accommodations, it may be cheaper and easier to adjust your schedule if you just plan to make a day trip of it.

For the latest updates and information on the status of the sakura, check our website (link here).

Where is the Best Place to see the Cherry Blossoms on Yoshinoyama?

The sakura of Yoshinoyama are separated into 4 groves or “senbon” (thousand trees 千本). These are, from lowest elevation to highest, Shimo-senbon, Naka-senbon, Kami-senbon, and Oku-senbon. In theory, these different groves bloom every year at different times as the season progresses from the bottom to top. So depending on when you come during a normal season, at least one grove should be in bloom somewhere, with the peak time usually encompassing Shimo-senbon to Kami-senbon. There are also various sakura trees along the main road, on temple grounds and so on that you can check out as well.

The Shimo-senbon grove starts from just in front of Yoshino Station at about 207 meters elevation. As soon as you get off the train you can immerse yourself in cherry blossom heaven as you walk through the beautiful scenery up into Yoshinoyama. Some people even just stop at Shimo-senbon and call it good. Oku-senbon is located at the very top of Yoshinoyama at 736 meters elevation and it is about 7 kilometers in distance one-way from Shimo-senbon via the most direct ridgeline route.

The most famous locations for cherry blossom viewing are in front of Yoshimizu-jinja Shrine and Hanayagura Viewpoint. These 2 points give you huge views overlooking cherry blossom groves, with Yoshimizu-jinja giving onlookers a view from the bottom looking up, and Hanayagura giving a view from the top looking down over the ridgeline district of Yoshinoyama.

If you are looking to walk or picnic in the cherry blossom groves, the Shimo-senbon, Naka-senbon and Kami-senbon groves are ideal for such activities. Starting from Yoshino Station, Shimo-senbon is actually on the way up (via Nanamagari Road) to the main street of the district. If you are looking for some photos that give a feeling of immersion in a forest of cherry blossoms as well as a little bit of isolation, Naka-senbon and Kami-senbon are probably the way to go. The trade off for experiencing the areas with less people is they require more time and effort to reach.

The least developed cherry grove is Oku-senbon, as it borders the backcountry and the Yoshino region’s artificial forests of cedar and cypress trees. That being said, there are definitely a few giant cherry trees back there that make it worth the ascent, as well as some spots that you can set up a picnic if you wish. Also, as of 2019, there are hundreds of new cherry trees now growing in Oku-senbon area that will continue to develop into more beautiful scenery as the years roll on. Oku-senbon sees the least amount of visitors on average every year.

The cherry blossom season is far and away the most crowded time of the year in the town of Yoshino (wherein Yoshinoyama is a district), to the tune of over 300,000 people visiting in the span of a week and a half or so. The area of Yoshinoyama is not a huge area, and there is basically one narrow, main street on which most of the town is located. Therefore, this street becomes a solid block of people for about 2-4 kilometers, most roadways in the area become gridlocked with vehicle traffic, and the trains running on the Yoshino Line get so packed with visitors that they resemble Tokyo during rush hour. So, if you come to see the cherry blossoms, expect huge crowds. Be prepared to stand for a long time on a packed train, wait in line for bathrooms, have difficulty finding a place to eat for lunch (or even sit down), and everything else that comes with hordes of people.

Dealing with the Horde

Unfortunately, there really is no way to entirely avoid the crowds of people that visit Yoshinoyama, especially during the peak season. When I first visited Yoshinoyama during this time, I did my best to walk up quickly through the ridgeline district to get away and immerse myself in nature, but I found that regardless of where I was, there were always many people who had the same idea. Like being caught in some crowded maze made from cherry tree groves. That being said, I have come to learn a few bits of information from experience that could help improve your trip here:

→ The trains going to Yoshino are usually packed in the morning to early afternoon, and the trains leaving are packed from the early afternoon to evening, so if you go opposite to this schedule, you might have an easier journey as well as less crowds to deal with.

The Whisper Road runs parallel to the main street of Yoshinoyama on the ridgeline above (right-side) and connects with it at several different points in the middle and upper areas of the district. This route is a godsend for anyone who just wants to enjoy the outdoor environment without having to deal with dodging the selfie sticks of tens of thousands of people crammed into a narrow street (as fantastic as the views accessible from the main street may be). The scenery of the valley is also genuinely nice, and it is a route I frequently enjoy walking through during every season.

Eventually, the Whisper Road will end in a fork, with the right path leading up to the main street and the left going to Nyoirin-ji Temple. Beyond the temple there is a small, cobblestone hiking path (signs will mark the way) that will eventually lead back to the main street near Hanayagura Viewpoint, which is only about a 20 minute walk from the highest point of Yoshinoyama. There are also other trails that branch off from path above Nyoirin-ji Temple, such as the Manyo-no-michi which leads down to Takataki Waterfall, one of the most beautiful locations in all of Yoshino.

I am a human with basic human needs, what is on Yoshinoyama for me? 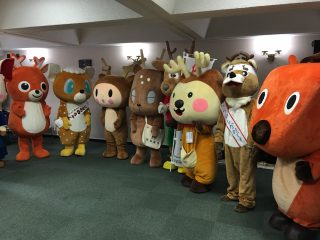 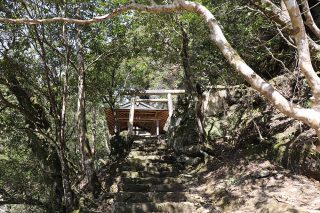 Born in Kuzu, Yoshino: -Having th… 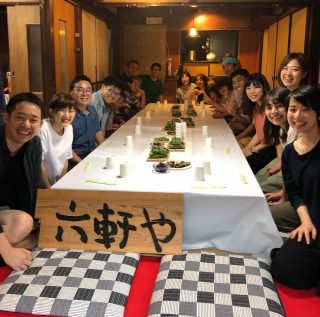